D3 5000 + K2 features the most bioavailable and bioactive form of supplemental vitamin K2 available and vitamin D3 (cholecalciferol), the identical form in which vitamin D is derived in the body from cholesterol and synthesized by sunlight on the skin. Studies confirm safety and efficacy for immune, neurological, muscle, bone, and heart health.* 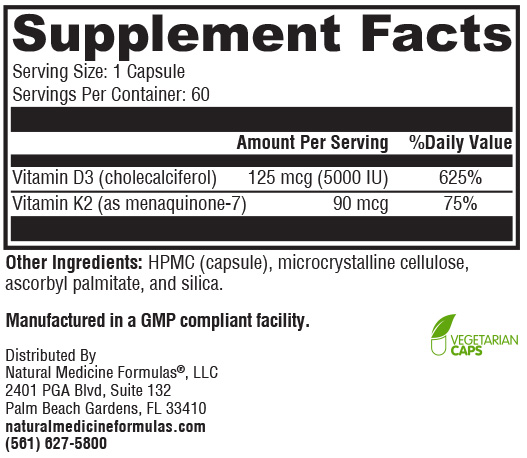 DIRECTIONS: Take one capsule daily, preferably at mealtime, or as directed by your healthcare practitioner.

Consult your healthcare practitioner prior to use. Individuals taking medication should discuss potential interactions with their healthcare practitioner. Consider total vitamin K intake (food + supplements) if you are taking blood-thinning medication. Do not use if tamper seal is damaged. D3 – 5000 + K2 features the most bioavailable and bioactive form of supplemental vitamin K2 available and vitamin D3 (cholecalciferol), the identical form in which vitamin D is derived in the body from cholesterol and synthesized by sunlight on the skin. Studies confirm safety and efficacy for bone and heart health.*

STORAGE: Keep closed in a cool, dry place out of reach of children.

Discussion
Naturally occurring vitamin K is found as either K1 (phylloquinone), which is derived from food sources such green leafy vegetables, or K2 (menaquinones). Menaquinones are designated as MK-n, where n denotes the length of the molecule’s aliphatic side chain. Menaquinones are synthesized by bacteria and can be obtained from animal-based and fermented foods. Structural differences between K1 and K2 impact their bioavailability and bioactivity. Furthermore, among menaquinones, menaquinone-7 (MK-7), with its longer side chain, is very hydrophobic. Compared to K1, MK-7’s physiochemical properties make it highly transportable by plasma lipoproteins, increase its extrahepatic (bones, arteries, etc.) availability, and produce its long half-life.[1-3]

Absorption of K1 from food can be limited due to its membrane-bound nature and the individual consumer’s digestive and absorptive variability. Moreover, adequate consumption of foods high in K2 can be challenging. Therefore, dietary supplementation is an important option. In addition, research suggests that higher levels of menaquinones are needed than were previously thought. Supplementary vitamin K can be found in three forms: synthetic K1; MK-4, which is structurally similar to K1; and natural, long-chain MK-7. Natural Medicine Formulas®, LLC provides MK-7 as Vitamk7™, a naturally derived and solvent-free vitamin K2 that has been obtained through a patent-granted biofermentation process of Bacillus subtilis natto cultures.*

MK-7 Bioavailability Increases Extrahepatic Tissue Utilization
Schurgers et al conducted human studies to compare the in vivo properties of orally administered K1 and MK-7. The results supported better bioavailability and utilization of MK-7. Expressed as AUC96, MK-7 demonstrated a six-fold better half-life, a seven- to eight-fold higher dose-response level, and a three times higher carboxylated to uncarboxylated osteocalcin ratio (cOC:ucOC†). Furthermore, on a molar basis, MK-7 is a three-to-four times more potent antidote for oral anticoagulation than is K1. Researchers note that, aside from sensitive individuals, “MK-7 supplements containing more than 50 mcg/d may interfere with oral anticoagulant treatment, whereas doses of at least 50 mcg are not likely to affect the INR value in a relevant way.”[2] Nonetheless, practitioners should closely monitor patients taking anticoagulants.*

While studies on the absorption and bioavailability of MK-4 at nutritional levels (i.e., doses of 500 mcg/d or lower) suggest less efficacy compared to longerchain menaquinones at similar doses,[4] this remains subject to debate. It is possible that rapid uptake of MK-4 could account for its observed lack of detection in serum after oral administration,[5] but more studies are needed for clarification.*

Bone Benefits
Among the dietary factors critical to bone health, vitamin K has emerged as a key player. Vitamin K is believed to be necessary for bone mineralization. Through carboxylation, vitamin K activates osteocalcin, the protein needed to bind calcium to the mineral matrix in bone.[6] Several studies have demonstrated the efficacy of MK-7 (e.g., doses of 45-90 mcg/d) to increase osteocalcin carboxylation and to increase the cOC:ucOC ratio. A high cOC:ucOC ratio is associated with bone health.[1,2,4] A recent in vitro study also showed an osteogenic effect of MK-7 administration on human mesenchymal cell differentiation. [6] In addition, the vitamin may protect bone integrity by reducing the synthesis of prostaglandin E2 or interleukin-6 by osteoclasts.[7] Animal and human studies have demonstrated a significant beneficial effect of MK-7 supplementation on bone health.[8-10] Vitamin K and vitamin D share some similar characteristics and are believed to act synergistically.*[11]

Cardiovascular and Other Health Benefits
Vitamin K benefits cardiovascular health by participating in the carboxylation of matrix GLA protein (MGP), a protein regarded to be the most potent inhibitor of arterial calcification. Researchers have demonstrated that supplementation with vitamin K reduces arterial calcium deposits[1,3,12] and that long-term intake of long-chain menaquinones is inversely correlated with calcium accumulation in arteries.*[5]

Vitamin K has specific receptor binding sites that allow it to regulate gene activity.[13] Besides its gene-mediating effects upon critical proteins, the vitamin can also bind with the steroid and xenobiotic receptors and influence their expression.[14] In addition, vitamin K also demonstrates antioxidant activity[15]; reduces levels of certain markers, such as acute phase reactants (e.g., C-reactive protein)[16]; and participates in the induction of apoptosis.*[17]

†The cOC:ucOC ratio can be used as a determinant of vitamin K status.