MethylFolate B12 Plus is a comprehensive formula designed to support optimal methylation and help maintain healthy homocysteine levels already within normal range. It features five key nutrients that are involved in homocysteine metabolism: folate as calcium folinate and Quatrefolic®† for increased bioactivity; trimethylglycine; and vitamins B12, B6, and B2. These five nutrients, provided in activated forms, support enhanced methylation and overall cardiovascular health.* 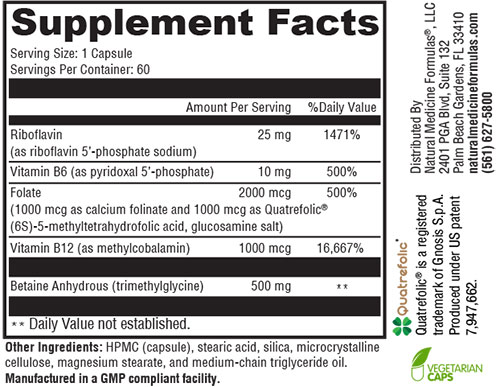 DIRECTIONS: Take one capsule one to two times daily, or as directed by your healthcare practitioner.

Methyl Folate B12 Plus is a comprehensive formula designed to support optimal methylation and help maintain healthy homocysteine levels already within normal range. It features five key nutrients that are involved in homocysteine metabolism: folate as calcium folinate and Quatrefolic® for increased bioactivity; trimethylglycine; and vitamins B12, B6, and B2. These five nutrients, provided in activated forms, support enhanced methylation and overall cardiovascular health.*

STORAGE: Keep tightly closed in a cool, dry place out of reach of children.

Discussion
MethylFolate B12 Plus provides 5-methyltetrahydrofolate (active folate), pyridoxal 5’-phosphate (active B6), methylcobalamin (active B12), riboflavin 5’-phosphate (active vitamin B2), and anhydrous betaine (trimethylglycine). These five nutrients promote the process of methylation. Methylation is the addition of a methyl group (a carbon atom with three hydrogen atoms attached) to proteins, enzymes, chemicals, DNA, or amino acids like homocysteine. It is a vital and fundamental process that takes place in many biochemical pathways involving detoxification, cardiovascular health, neurological health, eye health, muscle health, bone health, and redox balance. Effective methylation also has roles in the biosynthesis and breakdown of catecholamines, such as epinephrine. This is an important aspect of healthy adrenal functioning.*

Folic Acid (as calcium folinate and 5-methyltetrahydrofolate) This B vitamin has important roles in detoxification, nervous system function, breast tissue health, prenatal development, and the conversion of homocysteine back to methionine. In its active form, folic acid serves as a donor of methyl groups. Providing the combination of calcium folinate and 5-methyltetrahydrofolate (5-MTHF) allows optimal utilization of folic acid by bypassing metabolic steps to bioactivity.[1] In fact, 5-MTHF is the form into which the body must convert all other forms of folic acid before it can be used. In this formula, 5-MTHF is provided as calcium folinate and Quatrefolic®. Quatrefolic is proven to have greater stability, solubility, and bioavailability over the calcium salt forms of 5-MTHF.*

Despite research showing that folic acid and 5-MTHF have equivalent bioavailability and that supplementation with large doses of folic acid can “force” its conversion to the more active form, 5-MTHF may be the preferred form to support healthy folate status. This may be especially true in those with certain variations in folate metabolism or digestion that can affect conversion of folic acid to 5-MTHF.[2-4] Folate is stored in the red blood cells, where levels have been shown to be higher after supplementation with 5-MTHF compared to folic acid and placebo. Patients given 5 mg of 5-MTHF experienced plasma levels 700% greater than patients given folic acid.[5] In another study, authors concluded that 5-MTHF should be the primary choice of supplementation to support healthy homocysteine levels already within the normal range.*[6]

Trimethylglycine (as anhydrous betaine) Found in several tissues in humans, trimethylglycine acts as an alternative methyl donor in homocysteine metabolism. Trimethylglycine may also be a preventive agent against the activation of NF-kappaB.*[7]

Vitamin B12 (as methylcobalamin) Cyanocobalamin (the form of B12 present in many supplements) has to be converted in the liver to methylcobalamin, the form provided in Methyl Folate B12 Plus. B12 is another methyl donor, and studies suggest that it supports healthy homocysteine levels already within the normal range on its own and in combination with folate.*[8]

Vitamin B6 (as pyridoxal 5’-phosphate) This coenzyme form of vitamin B6 is the primary bioactive form. It is a coenzyme in approximately 100 enzymatic reactions.[9] Data from the Framingham Study showed an inverse association between homocysteine and good B6 status (as well as B12 and folate).*[10]

Vitamin B2 (as riboflavin 5’-phosphate) As the principal coenzyme form of B2, riboflavin 5’-phosphate is used in many oxidative reactions. Folate and riboflavin interact to support healthy homocysteine levels already within the normal range, possibly by maximizing the catalytic activity of the enzyme methylenetetrahydrofolate reductase (MTHFR). The effect may be unrelated to
MTHFR genotype.*[11]