Psyllium Husk Powder is a natural bulking agent that can be used daily for regularity or with detox/cleansing protocols.* Known for its ability to bulk over 100 times their original density, Psyllium Husk Powder offers an excellent source of natural fiber which is essential to the promotion of digestive regularity.* 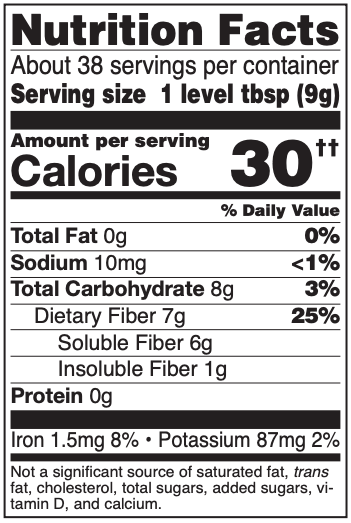 SUGGESTED USAGE: As a dietary supplement, mix 1 level tablespoon daily into at least 12 oz. of water and consume immediately. Start with 1 tsp. and gradually increase to 1 Tbsp. over 1-2 weeks. Be sure to drink plenty of water throughout the day.

Warning: Take this product as recommended. Without drinking enough liquid the product may swell in the throat, causing blockage or choking. Avoid use if you ever had esophageal narrowing or swallowing difficulties. Surveys have shown that the fiber content of the American diet is typically about half of government recommended levels. Psyllium Husk Powder can be a convenient way to increase the intake of dietary fiber. It has the ability to swell up to 50 times its initial volume when added to liquid.

Natural Medicine Formulas Psyllium Husk Powder is an edible soluble fiber and prebiotic. It’s often referred to as a bulking fiber because it expands after ingested, forming a gel-like mass by drawing water in from the colon. It then promotes easy, healthy elimination by sweeping waste out of the colon more quickly and efficiently. In addition, psyllium husk is known to have positive effects on heart health and cholesterol levels. Studies have also shown that psyllium is safe, well-tolerated and improves glycemic control for people with diabetes. Unlike stimulant laxatives, psyllium husk is gentle and not addictive.

Psyllium husk comes from a shrub-like herb called Plantago ovata. Each plant can produce up to 15,000 tiny, gel-coated seeds, from which psyllium husk is derived.

1. Relieves Constipation and Diarrhea*
Constipation is a very common health issue. Additional fiber intake in the form of psyllium is recommended by scientific studies to improve symptoms and provide natural constipation relief. When combined with water or another liquid, psyllium husk swells and produces more bulk, which stimulates the intestines to contract and helps speed the passage of stool through the digestive tract.
Since psyllium husk helps make elimination easier, it can also help with hemorrhoids, which are often the result of constipation. Psyllium husk can also be used to help relieve mild-to-moderate diarrhea because it soaks up water in the digestive tract, which helps make the stool firmer and slower to pass through the system.

2. Supports Healthy Cholesterol levels*
Research indicates that psyllium husk is a therapeutic addition to a healthy diet and lifestyle for people with high cholesterol levels.

3. Supports Healthy Blood Sugar levels*
Psyllium husk can help current diabetics as well as people trying to prevent diabetes since the dietary consumption of fibers like psyllium husk can assist in maintaining healthy glycemic balance in the body.

4. Supports Healthy Heart & Blood Pressure*
Adding high-fiber foods like psyllium husk to your diet can help to lower heart disease risk. More specifically, a diet high in water-soluble fiber like psyllium husk is associated with lower triglyceride levels and a lower risk of cardiovascular disease.
Psyllium also has been shown to improve hypertension or high blood pressure, which has a direct negative effect on heart health.

5. Healthy Weight Management*
Psyllium husk can be very helpful in maintaining and achieving a healthy weight since it encourages a feeling of satiety when it is consumed. Since we naturally eat less when we feel full, adding additional fiber to our diets, especially before meals, in the form of psyllium husk can help us not overeat. In addition, psyllium husk’s ability to improve the body’s natural elimination process positively affects weight as waste matter is removed more quickly and regularly from the body.

Directions: As a dietary supplement, mix 1 level tablespoon daily into at least 12 oz. of water and consume immediately. Start with 1 tsp. and gradually increase to 1 Tbsp. over 1-2 weeks. Be sure to drink plenty of water throughout the day.