Directions: Take two capsules one to two times daily, or 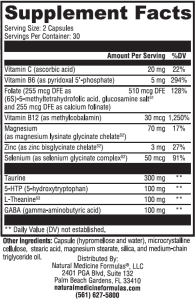 as directed by your healthcare professional.

Vitamins, minerals, amino acids, and other nutrients are necessary for the synthesis of neurotransmitters, healthy nerve transmission, healthy brain chemistry, and normal muscle contraction/relaxation. Components of Mood Synergy™ address each of these areas.*

Methylation is the addition of a methyl group (a carbon atom with three hydrogen atoms attached) to proteins, enzymes, chemicals, DNA, or amino acids like homocysteine. It is a vital aspect of nervous system health and is necessary for the synthesis of neurotransmitters.

Mood Synergy™ provides key nutrients involved in the methylation pathway, such as selenomethionine; vitamin B6 as pyridoxal 5’-phosphate; vitamin B12 as the readily bioavailable form, methylcobalamin; and folate as bioactive Quatrefolic® (5-MTHF glucosamine salt) and calcium folinate.[1] Pyridoxine nutritional status selectively modulates central production of serotonin and GABA (gamma-aminobutyric acid)—neurotransmitters that are involved in physical pain perception and mental wellness.*[2]

Magnesium is provided as Albion® TRAACS® glycinate chelate, a specific form demonstrated to support intraneuronal magnesium sufficiency.[3] As a cofactor for over 325 enzymes in the body, magnesium has a multitude of actions, including a calming effect on the nervous system and regulation of muscle contraction. Laboratory, animal, and epidemiological research suggests a link between magnesium sufficiency and a healthy mood and calm demeanor.*[4,5]

GABA (gamma-aminobutyric acid) is an important inhibitory neurotransmitter found in 30% to 40% of the brain synapses. It helps calm the brain by neutralizing the excitatory effects of glutamate. Research suggests that GABA supplementation or optimal GABA function in the brain positively affects neurological health, the body’s response to stress, mood, alpha and beta brain waves, and sleep.*[7-9]

5-HTP (5-hydroxytryptophan) is a precursor to serotonin. It is well-absorbed in the intestine and easily crosses the bloodbrain barrier.[10] Serotonin regulates many normal brain activities; influences other neurotransmitters, such as norepinephrine and dopamine; and is important in regulating mood and behavior, including food cravings. Research suggests that adequate levels of 5-HTP instill a sense of calmness and relaxation.*[11]

L-Taurine is a conditionally essential, neuroprotective amino acid that helps maintain cell volume and stabilize cell membranes in the brain. In addition to its roles in antioxidant activity and inflammatory cytokine modulation, taurine is important in the transmission of nerve impulses and overall nerve function. Oral supplementation increases GABA.*[12]

Take two capsules one to two times daily, or as directed by your healthcare professional.