DIM Protect™ provides 100 mg of diindolylmethane (DIM), a compound classified as a plant indole,  which is found in cruciferous vegetables such as broccoli, cabbage, and cauliflower. They are among the nutrients responsible for the widely recognized healthful properties of these foods, including the support of a healthy estrogen balance and inflammatory response.*

DIM Protect™ is manufactured using emulsification technology, which is designed to enhance the bioavailability and absorption of bioactive ingredients. This process uses an extract derived from the quillaja plant, vitamin E, delta- and gamma-tocotrienols, and medium-chain triglycerides (MCTs) to support absorption. 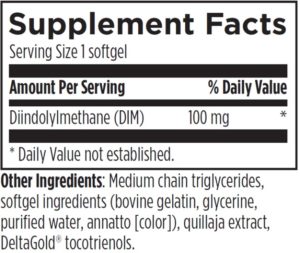 Directions:  As a dietary supplement, take one softgel per day with a meal, or as directed by your health care practitioner.

Storage: Store at room temperature, out of reach of children

Diindolylmethane (DIM) is derived from the primary plant indole found in cruciferous vegetables, known as indole-3-carbinol (I3C). Mastication, cooking, and other actions activate the enzyme myrosinase to convert I3C to DIM. Stomach acid additionally contributes to the formation of DIM, which is a more stable compound than I3C.1,2

Estrogen biosynthesis involves the aromatization of androgen into estrogen.3,4 The main circulating estrogen is 17 beta-estradiol (E2), which is produced in the ovaries as a circulating hormone. In postmenopausal females and those without ovaries, E2 is synthesized in extragonadal sites to act locally as a paracrine, with the aromatization of androgens to estrogens playing a more significant role.

For example, CYP1B1 converts E2 to 16 alpha-hydroxy estradiol, whereas CYP1A1 converts it to 2-hydroxyestradiol. Both enzymes can also convert E1 and E2 into 4-hydroxy metabolites. The different metabolites have different functions in the body, and a balance is required for optimal health.

The 16-alpha hydroxy estrone has a high capacity to bind to estrogen receptors and produce estrogenic effects, and 2-hydroxyestrone has little to no affinity for the estrogen receptor. The 4-hydroxy estrogens have the potential to cause DNA damage, generate mutations, and create oxidative damage. The lower affinity and subsequent decrease of bioavailable estrogens may be why the two-pathway metabolites relate to a lower risk of breast cancer.

A high 2:16 ratio (with 2 hydroxy to 16 hydroxy estrogens) is associated with reduced inflammation and a lower risk of breast cancer.8,13 Upon activation, estrogen receptors trigger pathways for cell growth, proliferation, and inflammation in addition to pre-malignant pathology. These estrogen metabolites may stimulate the synthesis of proinflammatory cytokines such as tumor necrosis factor-alpha(TNF-a).

They may also impact other conditions, including autoimmune diseases. Studies have found that higher levels of estrogen, including the hydroxylated metabolites, were significantly increased in the synovial fluid of patients with rheumatoid arthritis (RA).13-15

One study found that the 2:16 ratio in patients with RA and systemic lupus erythematosus (SLE) was more than 20 times lower than healthy subjects due to significantly lower levels of 2-hydroxy estrogens. These results were independent of steroid use and sex.16

DIM and Estrogen Metabolism Certain compounds, such as DIM, can influence estrogen metabolism to determine which metabolite is synthesized, pushing the pathways toward the more harmful or beneficial metabolites.6,17 DIM supports the synthesis of 2-hydroxyestrone, which in turn supports an increase of the 2:16 ratio without elevating the 4-hydroxy estrogens.

This is likely due to its impact on cytochromes P450 (CYP) enzymes, supporting the expression of CYP1A1 over the other enzymes.1,18 This positive impact on estrogen metabolism may also support conditions associated with higher levels of the more harmful estrogen metabolites.

In one prospective clinical trial, supplementing with 100 mg of DIM per day for a year in breast cancer gene (BRCA) carriers (with a high risk of breast cancer) was associated with a significant decline in fibroglandular tissue, whereas a control group did not experience any significant changes. Breast density is a surrogate marker for breast cancer risk.17 DIM has also been shown to promote more favorable estrogen metabolism by increasing the 2-hydroxy:16-alpha-hydroxy ratio due to increasing the 2-hydroxy pathway when used as adjunct therapy for breast cancer.19 Another trial found that DIM supplementation improved bleeding patterns in patients with endometriosis, especially when used as adjunct therapy.

This was likely due to its reduction of estradiol secretion.20 In addition to acting on estrogen, DIM may also impart anti-inflammatory effects by inhibiting TNF-α. DIM inhibits TNF-α and transforming growth factor-beta 1)–associated signaling pathways, including the activation of epithelial-mesenchymal transition, the initial step of cancer metastasis. It may also inhibit the NF-kB pathway and suppress T22/type 1 T helper 17 (Th17)-type immune reactions whIle promoting Treg differentiation.2,21-23

Recommended Use: As a dietary supplement, take one softgel per day with a meal, or as directed by your health care practitioner.