Microb-Balance™ is a proprietary blend of botanicals that can help support a healthy microbial balance in the gastrointestinal (GI) tract. Each ingredient in this product has a long history of use for supporting healthy gut flora.

Research has shown that these unique botanicals possess a wide array of properties that can help support optimal gut bacteria balance, including antibacterial, antiviral, antiparasitic, and antifungal activities. 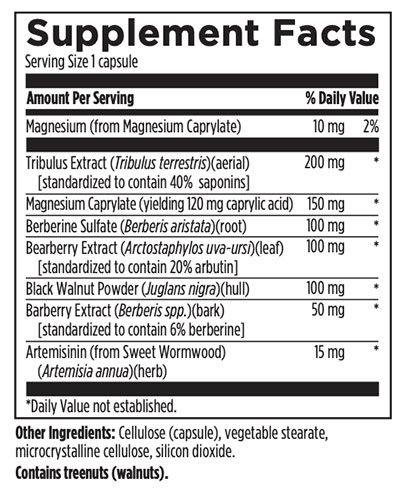 Directions:  As a dietary supplement, take one capsule twice daily between meals or as directed by your healthcare practitioner. Do not use if tamper seal is damaged.

Store at room temperature. Keep out of reach of children

Microb-Balance™ is a blend of botanical extracts with a long history of use as natural antimicrobials. The ingredients provide a broad spectrum of activity against the most common pathogens present in the human GI tract in conditions of dysbiosis while being relatively sparing of normal flora. The botanical substances in GI Microb-X™ are also commonly represented on sensitivity testing provided by the major functional laboratories performing stool analysis.

Tribulus Extract (also known as puncture vine), a member of the Zygophy-llaceae family, is an annual herb found in many tropical and moderate areas of the world, including the US and Mexico, the Mediterranean region, and throughout Asia. Its health and medicinal effects are the result of active phytochemicals steroidal saponins currently referred to by medical researchers and physicians as X steroidal saponins. These X steroidal saponins have the ability to influence the entire immune system of the body and have been shown to have antibacterial and antiviral effects.

Berberine is a bitter-tasting, yellow, plant alkaloid with a long history of medicinal use in Chinese and Ayurvedic medicine. Berberine is present in the roots, rhizomes and stem bark of various plants including Berberis aquifolium (Oregon grape), Berberis vulgaris (barberry), Hydrastis canadensis (goldenseal), Coptis chinensis (coptis or goldenthread), and Berberis aristata (tree turmeric). Berberine has also been used historically as a dye, due to its yellow color. Varma first documented the use of berberine in 1933 for the eye infection chronic trachoma. There is clinical evidence to support berberine’s use in the treatment of bacterial diarrhea. Berberine has also shown antimicrobial activity against bacteria, viruses, fungi, protozoans, helminths (worms), and chlamydia.

Artemisinin (from Sweet Wormwood; Artemisia annua) demonstrates significant antimicrobial effects and has been traditionally used even in the treatment of malaria. It has a particular historic use of being used to treat parasitic gastrointestinal infections. It is derived from the inner bark (wood) of the Artemesia annua tree and it kills parasites (worms), therefore it became known by the common name of wormwood.

Black Walnut Extract (Juglans nigra) also has a long history of use as an intestinal anti-parasitic (i.e., vermifuge, antihelmitic) in botanical medicine. It also possesses activity against common bacterial and fungal pathogens that occur in GI dysbiosis.

Bearberry Extract (Arctostaphylos uva-ursi) is grown throughout Asia, North America, and Europe and has a long history of medicinal use dating back to the 13th Century. The leaves have been used worldwide as a diuretic, astringent, antiseptic and treatment for urinary tract and gastrointestinal infections. A tea brewed with the leaves has also been used as a laxative. Arbutin, the main chemical constituent of uva ursi, is a phenolic glycoside that becomes hydrolyzed to hydroquinone. Both chemicals contribute to the antiseptic effects in the urinary and GI tracts. Other active constituents include tannins, mono and triterpenes, and flavonoids. Arbutin alone has also been reported to relieve pain from kidney stones, cystitis and nephritis.

Caprylic Acid is the common name for the eight-carbon straight chain fatty acid known by the systematic name octanoic acid. It is found naturally in palm and coconut oil, and in breast milk. Health care practitioners often recommend caprylic acid for use with candidiasis and bacterial infections. Due to its relatively short chain length it has no difficulty in penetrating fatty cell wall membranes, hence its effectiveness in combating certain lipid-coated bacteria, such as Staphylococcus aureus, various species of Streptococcus, and intramucosal Candida. Caprylic acid may affect the fluidity of viral and fungal cell membranes. The lactoperoxidase system in combination with caprylic acid can inhibit the growth of Escherichia coli and Staphylococcus aureus in food. Studies have reported that dietary caprylic acid inhibits the growth of Candida albicans and other opportunistic fungi in both the small and the large intestine. At the same time, caprylic acid does not seem to adversely affect the growth of beneficial intestinal microflora.

As a dietary supplement, take one capsule twice daily between meals or as directed by your healthcare practitioner. Do not use if tamper seal is damaged.