Metal Cleanse™ is designed to help the body rid itself of damaging oxidative elements. It features specialized ingredients, such as EDTA, Himalayan shilajit extract (50% fulvic acid), chlorella, coriander, and antioxidant-stimulating nutrients. These ingredients perform in concert to support your health when your body is challenged by environmental toxins, such as heavy metals.* 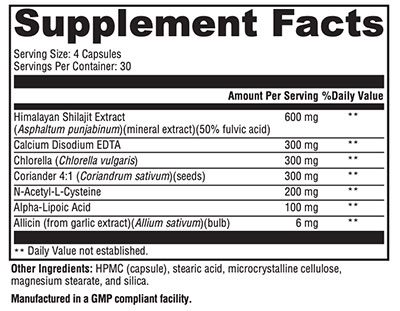 Directions: Take two to four capsules daily, or as directed by your healthcare practitioner.

Himalayan Shilajit Extract (Asphaltum punjabinum) is a purified form of shilajit also known as salajit, shilajatu, mimie, or mummiyo. This naturally occurring phytocomplex is found in high mountain rocks, especially those of the Himalayas and Hindu Kush ranges of the Indian subcontinent. It is formed from decomposed plant material that has been preserved in the dark pressure of rocky crevasses. As the sun warms the rocks and the snow melts, the shilajit seeps out and is scraped from the stone by hand. Natural Medicine Formulas®, LLC’s shilajit is meticulously harvested at high altitudes to ensure the purest product possible. It is then low-temperature dried and tested to be free of pollutants. Shilajit is composed mainly of humic substances, including fulvic acid, plus some oligoelements (minute amounts of trace elements). It has a rich history of use in the Indian Ayurvedic and Siddha systems of medicine, and it is known as a rasayana because of its rejuvenating qualities.*[1]

Modern research suggests that shilajit has powerful antioxidant activity.[1-3] As an example, in an animal model, processed shilajit increased superoxide dismutase (SOD), catalase (CAT), and glutathione peroxidase (GPx) activities in a dose-dependent manner.[3] Furthermore, humic substances, as found in shilajit, have been shown to affect the distribution, metabolism, and absorption of heavy metals, such as cadmium and lead.[4-7] One human study showed that the daily consumption of humic acid with bound complex micro-elements for six weeks decreased uptake and increased urinary excretion of cadmium in alkaline battery production workers.*[8]

EDTA (ethylenediaminetetraacetic acid) is a synthetic amino acid compound and perhaps the most well-known and often-used intravenous chelating agent. Oral EDTA is poorly absorbed, but it is thought to support detoxification of metals largely in the gastrointestinal tract.[9,10] More studies are needed to validate oral administration. It is believed that there is a benefit in combining EDTA with other chelators because EDTA acts slowly and could potentially lead to redeposition of metals.[11] Due to EDTA’s metal-binding ability, it is important to replace beneficial minerals, such as zinc, copper, iron, cobalt, and manganese.*

Coriander Seed Extract (water-extracted) (Coriandrum sativum), also known as cilantro, appears to suppress the deposition of lead and arsenic by chelating these metals.[12,13] In a study, lead-induced histological changes in the testis of albino mice were prevented to some extent by concomitant daily administration of C sativum extracts, perhaps due to a reduction in associated oxidative stress.[14] In an another study, tissue-specific amelioration of lead-induced oxidative stress occurred in the brains of Wistar rats after administration of hydroalcoholic seed extract of C sativum.*[15]

Allicin is the main biologically active component of garlic clove extracts and has promising effects on toxic metal accumulation in experimental research.[16] In animal and in vitro models, garlic was able to reduce cellular exposure to, or accumulation of, lead, cadmium, and mercury.[17-22] Furthermore, various extracts and forms of garlic have demonstrated garlic’s ability to positively affect detoxification pathways.*[22]

Chlorella is a naturally occurring micro-algae and an excellent source of chlorophyll—a detoxifying substance that is also thought to bind toxic metals. The positive effect of chlorella supplementation on toxic metals, including methylmercury, cadmium, and lead, is supported by animal research.[23,24] For example, testing its metal chelating ability, researchers observed a dramatic 66.03% reduction in blood lead levels in mice receiving chlorella extract (50 mg/kg/day) concurrent with lead exposure compared to lead-exposed, non-treated mice.*[23]

N-Acetyl-L-Cysteine (NAC) and Alpha-Lipoic Acid (ALA) are well-known for their antioxidant activity. Exposure to heavy metals increases free radical production and oxidative stress.[25] Research suggests that there is a beneficial role for free radical scavengers in reducing the oxidative stress that is common with toxic metal exposure.[26] NAC has the ability to interact with reactive oxygen species (ROS) and stimulate the body to produce glutathione. This can enhance cell survival after exposure to heavy metals or toxins.[27] In addition, ALA may directly chelate or reduce the oxidative capacity of metals, such as copper, arsenic, cadmium, and mercury.*[28-31]

Directions: Take two to four capsules daily, or as directed by your healthcare practitioner.