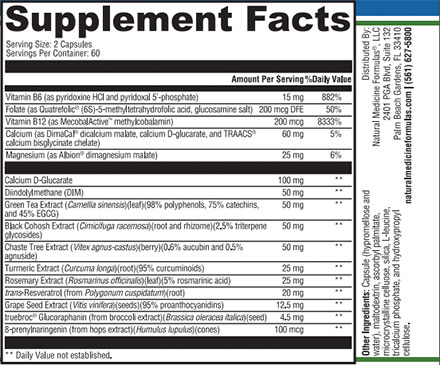 Take two capsules twice daily, or as directed by your healthcare practitioner.

Whether it be during menstruation, ovulation, or menopause, the hormones in the female cycle fluctuate throughout a woman’s lifetime. Hormonal imbalances contribute to the irritability and cramping commonly associated with premenstrual syndrome (PMS) and the hot flashes, sleep problems, and vaginal dryness associated with menopause. Hormonal imbalances may be exacerbated by xenoestrogens, a subcategory of endocrine disruptors that specifically have estrogen-like effects. Xenoestrogens have the capability to alter hormonal function in tissues, including breast, uterus, and cervix. Xenoestrogens may disrupt neurotransmitter balance, glucose homeostasis, normal reproduction, and healthy metabolism.[1,2] Additionally, improper aromatase conversion of excess estrogens has been associated with certain forms of hormone-dependent cancers. Fem Synergy™ provides supplemental ingredients that have been traditionally and clinically used to support healthy hormone balance and promote detoxification of excess estrogens.*

Chasteberry (Vitex agnus-castus) has been used for centuries to support women with hormone-related gynecologic complaints. Chasteberry is well-known for its balancing effect on female hormones, prompting more regular cycles. Modern research has validated this traditional use by showing that various preparations of chasteberry demonstrate positive effects in women with PMS.[3,4] The German Commission E approves the use of chasteberry to support menstrual cycle regularity, breast tenderness, and PMS; and it is widely recommended by family physicians and gynecologists in Germany for these issues.[5] Chasteberry iridoids and flavonoids are thought to exert benefits through indirect effects on various hormones, especially prolactin and progesterone.[5,6] Chasteberry also supports a normal, healthy attitude during the perimenopausal transition. It appears to significantly compete for binding at the estrogen receptors. Chasteberry has normalized short luteal phases and progesterone synthesis. The popular herb may help ease the common, transient symptom of mild breast tenderness possibly by inhibiting prolactin secretion.*[7]

Black cohosh (Cimicifuga racemosa) is an herb traditionally used by American Indians for support of gynecological issues, including menstrual cramping and related low-back discomfort. It is commonly used to address menopausal symptoms, which can be attributed to its gentle phytoestrogenic activity and ability to decrease the production of luteinizing hormone. Simply put, phytoestrogens are naturally occurring compounds in plants that have the ability to block estrogen receptor sites. Research suggests that black cohosh effectively maintains a sense of calmness and healthy outlook, and it may help address menopause-associated vasomotor symptoms.[8,9] According to Ruhlen et al, black cohosh may exert its benefits through selective estrogen receptor modulation, serotonergic pathways, antioxidant activity, or inflammatory pathways.[10] Various studies demonstrate that black cohosh may also reduce hot flashes, night sweats, vaginal dryness and thinning, sleep disturbances, and emotional symptoms.*[11,12]

Hops are the female seed cones of the hop species Humulus lupulus. The prenylflavonoid 8-PN, obtained from the lupulin glands of hop cones, appears to provide greater phytoestrogenic activity than other commonly used isoflavone phytoestrogens, such as daidzein and genistein.[13] In vitro and in vivo studies indicate a potential role for 8-PN in easing common menopausal concerns.[14,15] In pilot and prospective studies that were randomized and placebo-controlled, postmenopausal women who took 100-250 mcg/day of 8-PN experienced reductions in vasomotor symptoms and other common menopausal discomforts.[15,16] 8-PN has also been observed to affect aromatase, a cytochrome P450 isoenzyme responsible for the conversion of circulating androgens into estrogens. Aromatase is expressed in several tissues, such as breast tissue, where estrogens exert physiological activity.[17] Research has suggested that prenylflavonoids interact with aromatase in a manner that positively affects endogenous estradiol biosynthesis.*[18]

Healthy metabolism of exogenous and endogenous estrogens can be pivotal for hormonal balance.[19] DIM (3,3’-diindolylmethane) is the stable, bioactive metabolite formed when stomach acid breaks down indole-3-carbinol (I3C), a sulfur-containing glucosinolate present in cruciferous vegetables.[20] DIM has been found to support hormone metabolism and immune activity and stimulate antioxidant and detoxification systems.[21] DIM helps maintain safe estrogen levels by aiding the conversion of dangerous estrogen fractions to more favorable metabolites and by promoting restoration of healthy hormone ratios. It promotes metabolism of estrogen into the favorable and protective 2-hydroxyestrone (2-OHE) metabolite versus production of 4-hydroxyestrone (4-OHE) and 16-alpha-hydroxyestrone (16-alphaOHE) metabolites.*[22]

The action of DIM is complemented by glucoraphanin, a compound isolated from broccoli seed that breaks down into sulforaphane glucosinolate (SGS). Researchers have shown that when SGS is broken down to sulforaphane (its active form), it safely and effectively upregulates the Nrf2 system, activates the antioxidant response element (ARE), enhances the production of important antioxidants, and activates vital phase II detoxification enzymes.[23] These mechanisms provide protection from toxins, xenoestrogens, and reactive intermediates formed after phase I detoxification.*

Folate, Methylcobalamin (B12), Vitamin B6, Calcium, and Magnesium

Take two capsules twice daily, or as directed by your healthcare practitioner.

*These statements have not been evaluated by the Food and Drug Administration. This product is not intended to diagnose, treat, cure, or prevent any disease