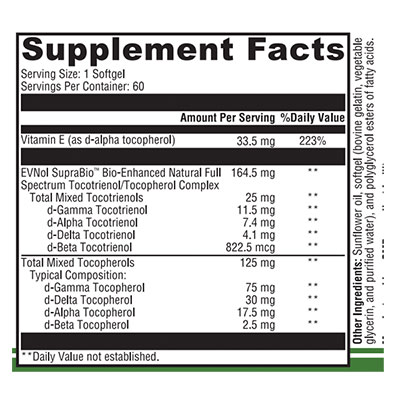 Directions:  Take one softgel twice daily, or use as directed by your healthcare practitioner.

Storage: Keep in cool, dry place out of reach of children

Vitamin E, in its natural form, comprises eight different compounds: alpha-, beta-, gamma-, and delta-tocopherols and alpha-, beta-, gamma-, and delta-tocotrienols. Both tocopherols and tocotrienols are important to human health. Known as the “master antioxidant,” vitamin E has the ability to attenuate oxidative stress, and its antioxidant-related effects on various organs and systems have been the focus of vast research. More recently, non-antioxidant mechanisms have been proposed, such as those that affect cell-signal transduction and gene expression.[1] Though the vast majority of research has been on alpha-tocopherol, recent mechanistic studies indicate that other isomers of vitamin E, such as gamma- and delta-tocopherols and tocotrienols, have superior antioxidant and cell-signaling properties that offer greater health benefits.*[2,3]

Studies have demonstrated that tocotrienols have superior antioxidant activity compared to tocopherols. Tocotrienols also exhibit biological activities related to neuroprotection, radioprotection, cell-life regulation, cytokine modulation, and lipid metabolism that are not shared by tocopherols.[3-5] Many of these benefits are thought to be mediated via their carboxychromanol metabolites.[2,6]

Among other actions, tocotrienols have been shown to inhibit HMG-CoA reductase (3-hydroxy-3-methylglutaryl-coenzyme A reductase), attenuate transcription factor NF-κB activation, and inhibit COX-2.[7,8] Given these mechanisms, in addition to their antioxidant mechanisms, tocotrienols have a very broad range of applications. Due to the poor absorption and low bio-availability of tocotrienols, scientists developed EVNol SupraBio™.*

EVNol SupraBio is a natural, full-spectrum tocopherol and tocotrienol complex extracted and concentrated from the red palm fruits (Elaeis guineensis) of sustainable plantations in Peninsular Malaysia. This vitamin E complex also contains minute amounts of other phytonutrients such as plant squalene, phytosterols, coenzyme Q10, and mixed carotenoids that are naturally extracted together with tocotrienols.

This patented formula contains a precise mixture of oil and approved food emulsifiers at optimum ratio and processing that self-emulsifies in the gastrointestinal tract to facilitate and provide a rapid and consistent absorption of tocotrienols into the plasma, independent of dietary fat or food intake.*

Kholsa et al were the first to establish that oral supplementation of EVNol SupraBio resulted in a peak plasma level 12- to 13-fold the level established for neuroprotection.[9] Later, in a two-period, two-sequence, crossover study performed in healthy human volunteers, researchers demonstrated that the SupraBio system increased the rate and extent of absorption of individual tocotrienols by an average of 250% compared to a regular tocotrienol oil extract.[10]

Moreover, EVNol Suprabio is the only tocotrienol/tocopherol complex in the market that has been the subject of an actual human tissue distribution study. In that study, Patel et al demonstrated that orally supplemented tocotrienols from EVNol SupraBio are absorbed into plasma and delivered and accumulated in vital organs, including the brain.*[11]

EVNol SupraBio is a heavily researched tocopherol/tocotrienol product that has been scientifically substantiated with human clinical studies on brain health, liver support, beauty, and cardiovascular health.[11-18] For example, in a randomized, placebo-controlled, two-year neuroprotection study (n = 121), supplementation with 200 mg/d EVNol SupraBio attenuated the progression of injury to brain white matter.[12]

Supplementation has also been shown to support the desired immune response to vaccine.[17] And in a randomized, double-blind, placebo-controlled trial (n = 38), volunteers with hair loss who were given 100 mg of EVNol SupraBio daily experienced a 34.5% increase in number of hairs at the end of eight months, compared to a 0.1% increase in the placebo group.[18] The higher activity of tocotrienols in certain organs may, in part, be explained by the fact that the unsaturated side-chain of tocotrienols allow more efficient penetration into tissues, such as brain and liver tissues, that have saturated fatty layers.*[3,13]

It is clear from the emerging data that tocopherols and tocotrienols have complementary, unique, and important functions.[3] Providing a formula that supplies the full spectrum of natural vitamin E isomers is an important option for practitioners and their patients.*