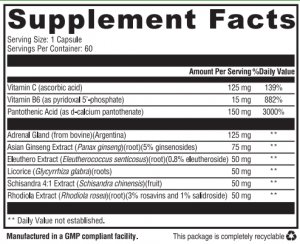 Take one capsule twice daily, or as directed by your healthcare practitioner.

Details
Cortisol is one of the main stress-mediating glucocorticoid hormones produced by the adrenal gland. It acts to maintain blood glucose levels necessary for normal brain and physical functions. Typically, cortisol levels spike in the morning and gradually decrease throughout the day. When the body is under stress, cortisol production increases. With prolonged increased levels of cortisol, the body produces more glucose leading to an increase in risk for depressed immune function, increased production of cytokines, insulin resistance, weight gain, and other potentially chronic conditions. Eventually, the adrenal production of cortisol weakens resulting in “adrenal fatigue,” which causes feelings of tiredness, mild depression, and general malaise.

Adrenal Vibrance™ is formulated to support individuals who present with cortisol levels that are low throughout the day and are sometimes referred to as being in the “burnout” or “flat-line” stage of adrenal fatigue.*

Vitamin C
The release of adrenocorticotropic hormone (ACTH) from the pituitary gland in tandem with the body’s physiological response to stress will deplete the relatively large amount of vitamin C typically stored in the adrenal cortex.[1,2] This vitamin is essential for the synthesis of epinephrine, the hormone secreted by the adrenal medulla in response to stress. Epinephrine, in turn, plays a role in the synthesis of aldosterone, the hormone that regulates blood pressure, volume, and pH.*

Vitamin B6, Pantothenic Acid
Vitamin B6, acting as a coenzyme, has a role in the conversion of muscle glycogen to glucose, which is needed for a proper response to stressors, the synthesis of serotonin, and the support of the immune function.[3] Physiologically, vitamin B6 influences the adrenal glucocorticoid receptor, stimulates the secretion of adrenal catecholamines, and aids in sodium and potassium balance.*[2]

Pantothenic acid is essential to the adrenal glands for the production of glucocorticoids. It forms pantethine in the body, which then converts to coenzyme-A—the most active metabolic enzyme in the human body needed to produce cellular energy.[4] Pantothenic acid plays a critical role in the utilization of fats and carbohydrates in energy production and in the manufacture of adrenal hormones and red blood cells.*[5]

Asian Ginseng (Panax)
As an important herbal remedy in traditional Chinese medicine, Panax ginseng has been used for thousands of years, primarily for energy production. The main active agents have been identified as ginsenosides, and they are the focus of much published research.[6] Experimental models show that ginseng and ginsenosides have beneficial effects in supporting the adrenal glands; protecting the gastric mucosa; and supporting healthy body weight, blood hormones, and the gene expression of catecholamine synthesizing enzymes.[6-10] Ginsenosides also have immune-supporting and cytokine-modulating activities.*[7,11]

Eleuthero
In the 1950s, Russian researchers investigated the properties of eleuthero and discovered that it had “adaptogenic” activity. An adaptogen refers to a substance that supports the body’s ability to adapt and promote healthy physiological functioning, most notably in relation to stress. This balancing effect has been evaluated in numerous human clinical trials that demonstrate the ability of eleuthero to increase stamina, mental alertness, and the capability of the participants to handle stress.*[12,19]

Rhodiola
This adaptogenic herb has been used traditionally in Eastern Europe and Asia for centuries to increase stamina, maintain a healthy mood, support the nervous and immune systems, and maintain healthy male sexual function.[13,14] According to Panossian et al, experimental studies performed on isolated organs, tissues, cells, and enzymes demonstrated that rhodiola preparations exhibit adaptogenic effects that support nerve, brain, and heart health and instill calm, enhance longevity, and stimulate the nervous system.[14] Rhodiola may also have a positive effect on brain neurotransmitters, such as dopamine and serotonin, and may influence endogenous opioid levels.[13] According to a review of the literature on rhodiola, supplementation supports healthy work performance, quality of sleep, appetite, and energy levels subsequent to intense physical or intellectual strain. Salidrosides and rosavin have been identified as primary actives. The rhodiola extract in Adrenal Vibrance™ is standardized to provide no less than 1% salidrosides and 3% rosavin.*

Schisandra
Schisandra has been widely studied for its effect on helping the body adapt to psychological and physical stressors. It has been suggested that schisandra affects the basal levels of nitric oxide and cortisol, which promote endurance and accuracy of movement, mental performance, and working capacity.*[15,16] Schisandra is commonly used in combination with other adaptogens. In a double-blind placebo-controlled trial with rhodiola and eleuthero, improvement in attention as well as speed and accuracy on cognitive tasks was noted.*[17]

Directions
Take one capsule twice daily, or as directed by your healthcare practitioner.

12. Panossian A, Wikman G. Effects of adaptogens on the central nervous system and the molecular mechanisms associated with their stress-protective

16. Panossian A, Wikman G. Pharmacology of Schisandra chinensis Bail.: an overview of Russian research and uses in medicine. J Ethnopharmacol. 2008

19. Ronzio R. A rationale for the use of glandular products. Stichting Sci Nutrition. http://tuesdayminute.net/A-Rationale_for_the_use_of_glandular_products.