CoQ10-8X is Natural Medicine Formulas’ proprietary, crystal-free CoQ10 formula that offers unparalleled absorption and bioavailability. This formulation has been shown in clinical trials to be over eight times more absorbable than powdered CoQ10 and more than twice as bioavailable as other oil-based or so-called “nano”-dispersed formulas on the market. The proprietary multilipid carrier employed in CoQ10-8X is unmatched for optimal utilization in the support of cardiovascular and energy-based health needs.* 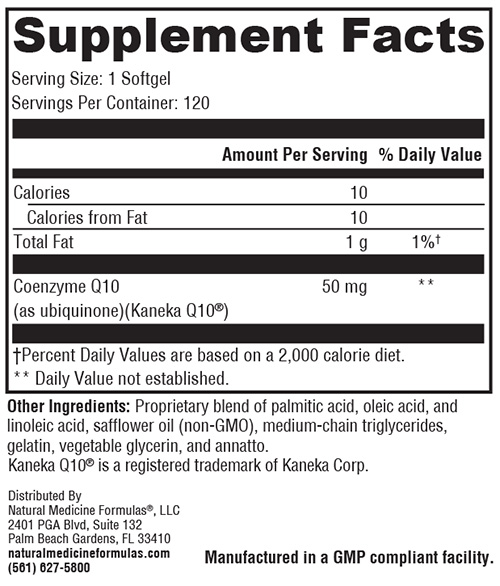 DIRECTIONS: Take one softgel one to two times daily, or as directed by your healthcare practitioner. Optimal results may be achieved by consuming with meals that contain fat.

CoQ10 – 8X is Natural Medicine Formulas® proprietary, micro-emulsified, 50 mg CoQ10 for convenient dosing. The formula offers unparalleled absorption and bioavailability. CoQ10 – 8X has been shown in clinical trials to be over eight times more absorbable than powdered CoQ10 and more than twice as bioavailable as oil-based or so-called “nano”-dispersed formulas on the market. CoQ10 – 8X ’s proprietary multi-lipid carrier is a formulation that is unmatched for optimal utilization in the support of cardiovascular and energy-based health needs.*

STORAGE: Keep closed in a cool, dry place out of reach of children. Variations in temperature may cloud the softgels. This does not affect the formula’s efficacy or safety. Do not refrigerate.

Discussion
Coenzyme Q10 (CoQ10) is a fat-soluble substance that plays a major role in energy production and antioxidant protection in the body. It is found in the body primarily in its interchangeable ubiquinone and ubiquinol forms. In general, CoQ10 supports mitochondrial energy production, antioxidant activity, cell membrane stabilization, gene expression and apoptosis, and neurological and cardiovascular health.[1,2] Levels of CoQ10 in the body can be affected by a number of factors. Dietary contribution of CoQ10 is minimal and serum levels tend to decline with age or can be reduced due to druginduced nutrient depletion.*[3-5]

Synthesis of CoQ10 in the body is regulated by the enzyme HMG-CoA reductase. A variety of factors can inhibit HMG-CoA reductase and hinder CoQ10 production and availability, resulting in a potential increase in oxidative stress and a decrease in energy generation. In the event of reduced production, or drug-induced nutrient depletion, physicians recommend supplementation with CoQ10 to help maintain normal levels in the body.[6,7] Supplementation with CoQ10 has been found to promote favorable outcomes for a targeted group of patients[8] and to improve quality of life, energy levels, neurological health maintenance, exercise tolerance, and muscle comfort for a wide range of individuals.[1,9] A research study utilizing functional intracellular assay (FIA) suggested that CoQ10 may be a potential peripheral biomarker of antioxidant status in neurological health maintenance.*[10]

CoQ10-8X contains a unique, crystal-free, highly bioavailable form of ubiquinone and represent a new generation of CoQ10 supplementation. This soy-free formulation contains five lipids that help dissolve CoQ10 crystals into single molecules. This process helps stabilize the formula to prevent recrystallization and facilitates passive diffusion to enhance absorption. Earlier generation supplements were poorly absorbed (0.6-1.0%), pure crystalline (powdered) forms of CoQ10, which served as the industry standard from the mid-1970s to the mid-1990s. A variety of forms and delivery systems offered somewhat improved absorption (2.3-5%) after 1995; however, these forms were unstable and crystallized and therefore difficult for the body to absorb. The five-lipid carrier, crystal-free CoQ10 in Natural Medicine Formulas’ CoQ10 CF50 represents innovation and improvement in CoQ10 delivery and bioavailability.*